Itch has many unspeakable games...and this is one of them.

The Fae have spent years floating between worlds, feeding on the meta-static energy that dwells there. However, when they crashed into the human world, they had to find new ways to sustain themselves.

They quickly learned that a human's sense of being worked just as well as meta-static energy. They also found that humans were more than willing to sacrifice a small part of themselves if they got some benefit from it.

Become Unspeakable: Strip Poker For The Soul is a poker-based urban fantasy storytelling ttrpg that can be played with or without a GM! Players take the role of characters who have made pacts with the Fae as they try to realize their goals by any means necessary.

When confronted with a challenge or obstacle, players have to try and make the best poker hand possible. However, if that proves to not be possible, they can ask their Fae helper to consume one part of them.

This gives the character a boost while also permanently removing that part from play. In fact, if any other players use the word that was consumed, that character loses even more of themselves as they spiral downward.

Players who lose everything about themselves become Unspeakable. These players can try to help their surviving comrades, but beware! Even acknowledging an Unspeakable has grave repercussions.

To play, you will need:

- Character Sheets For All Players

- Pens Or Ways To Damage The Sheets

In order to download this Fae Contract you must purchase it at or above the minimum price of $10 USD. You will get access to the following files:

Support this Fae Contract at or above a special price point to receive something exclusive.

Free gifts from the Fae? What could go wrong? 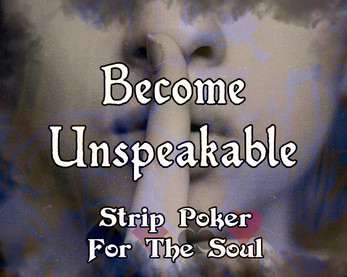 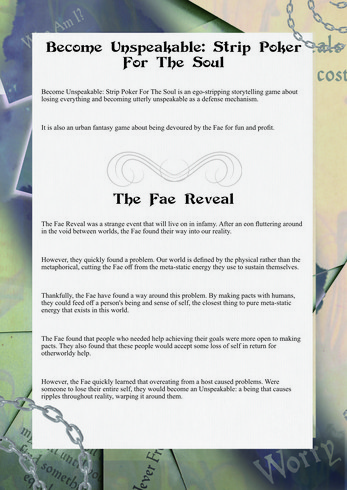 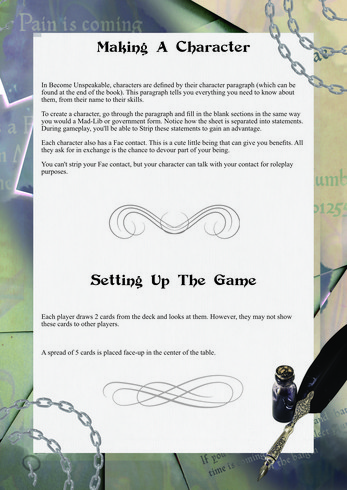